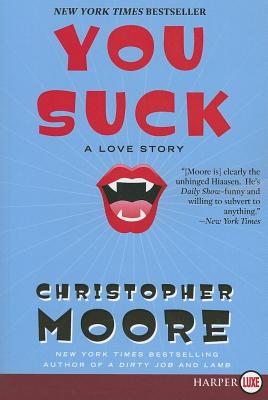 By Christopher Moore
$21.95
Email or call for price

"You bitch, you killed me. You suck!"

Literally. Just ask Thomas C. Flood. Waking up after a fantastic night unlike anything he's ever experienced, he discovers that his girlfriend, Jody—the woman of his dreams—is a vampire. And surprise! Now he's one, too.

For some couples, the whole biting-and-blood thing would have been a deal breaker. But Tommy and Jody are in love, and they vow to work through their issues. Like how much Jody should teach Tommy about his new superpowers (and how much he needs to learn on his own). Plus there's Tommy's cute new minion, sixteen-year-old goth girl Abby Normal. (Well, someone has to run errands during daylight hours!)

Making the relationship work, however, is the least of Jody and Tommy's problems. Word has it that the vampire who nibbled on Jody wasn't supposed to be recruiting any new members into the club. Even worse, Tommy's erstwhile turkey-bowling pals are out to get him, at the urging of a blue-dyed Las Vegas call girl named (duh) Blue.

And that really sucks.

Christopher Moore is the author of the novels Secondhand Souls, Sacré Bleu, A Dirty Job, and Lamb. He lives in San Francisco, California.

“Fun, funny and just a little bit gross -- what more could anyone ask? Grade: A”
— Rocky Mountain News

“Christopher Moore mines a comic gold mine, deftly skewering the conceits of the vampire genre with precision and wit.”
— Buffalo News

This feature require that you enable JavaScript in your browser.
END_OF_DOCUMENT_TOKEN_TO_BE_REPLACED

This feature require that you enable JavaScript in your browser.
END_OF_DOCUMENT_TOKEN_TO_BE_REPLACED

This feature require that you enable JavaScript in your browser.
END_OF_DOCUMENT_TOKEN_TO_BE_REPLACED

This feature require that you enable JavaScript in your browser.
END_OF_DOCUMENT_TOKEN_TO_BE_REPLACED