The Magic Strings of Frankie Presto: A Novel (Paperback) 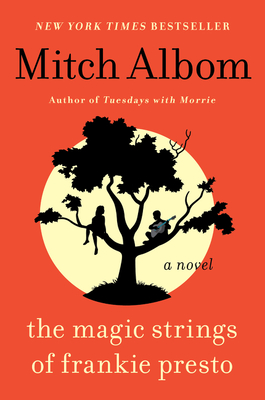 From the beloved author of the #1 New York Times bestsellers Tuesdays with Morrie and The Five People You Meet in Heaven comes his most critically acclaimed novel yet—a stunningly original tale of love: love between a man and a woman, between an artist and his mentor, and between a musician and his God-given talent.

Narrated by the voice of Music itself, the story follows Frankie Presto, a war orphan born in a burning church, through his extraordinary journey around the world. Raised by a blind guitar teacher in Spain and gifted with a talent to change people’s lives—using six mysterious blue strings—Frankie navigates the musical landscape of the twentieth century, from the 1950s jazz scene to the Grand Ole Opry to Elvis mania and Woodstock, all the while searching for his childhood love.

As he becomes a famous star, he loses his way, until tragedy steals his ability to play the guitar that had so defined him. Overwhelmed by his loss, Frankie disappears for decades, reemerging late in life for one spectacular yet mystifying farewell.

Part love story, part magical mystery, The Magic Strings of Frankie Presto is Mitch Albom at his finest, a Forrest Gump-like epic about one man’s journey to discover what truly matters and the power of talent to change our lives.

Mitch Albom is the author of numerous books of fiction and nonfiction, which have collectively sold more than forty million copies in forty-seven languages worldwide. He has written seven number-one New York Times bestsellers – including Tuesdays with Morrie, the bestselling memoir of all time, which topped the list for four straight years – award-winning TV films, stage plays, screenplays, a nationally syndicated newspaper column, and a musical. Through his work at the Detroit Free Press, he was inducted into both the National Sports Media Association and Michigan Sports halls of fame and is the recipient of the 2010 Red Smith Award for lifetime achievement. After bestselling memoir Finding Chika and “Human Touch,” the weekly serial written and published online in real-time to raise funds for pandemic relief, his latest work is a return to fiction with The Stranger in the Lifeboat (Harper, November 2021). He founded and oversees SAY Detroit, a consortium of nine different charitable operations in his hometown, including a nonprofit dessert shop and food product line to fund programs for Detroit’s most underserved citizens. He also operates an orphanage in Port-Au-Prince, Haiti, which he visits monthly. He lives with his wife, Janine, in Michigan. Learn more at www.mitchalbom.com, www.saydetroit.org, and www.havefaithaiti.org.

“Albom’s fable about the power of song carries you along like a beautiful melody.” — People

“Albom’s The Magic Strings of Frankie Presto hits the right notes. Albom’s love for music is richly apparent... and his maxims about life will no doubt bring readers on a pleasantly sentimental journey about the bandmates in their lives.” — USA Today

“A beautiful story that forces us to think about the concept of a life well lived…Albom brings his literary magic once again.” — Huffington Post

“Albom can say in one sentence what others can spend a lifetime trying to convey.” — The Book Wheel

“Within a few pages, you’ll be as delighted with this sparkling book as I was. Start it, stick with it, and you’ll find ’The Magic Strings of Frankie Presto to be a book of note.” — Yankton Daily Press

“As always, Albom’s novel has a larger message...and The Magic Strings of Frankie Pesto resonates with a kind of cosmic connection.” — Miami New Times

“What an entertainer! Mitch Albom, author, playwright, screenwriter, nationally syndicated columnist - and philanthropist, as his audience learned, was a charmer…There seemed to be no end to this man’s talents.” — NorthJersey.com

This feature require that you enable JavaScript in your browser.
END_OF_DOCUMENT_TOKEN_TO_BE_REPLACED

This feature require that you enable JavaScript in your browser.
END_OF_DOCUMENT_TOKEN_TO_BE_REPLACED

This feature require that you enable JavaScript in your browser.
END_OF_DOCUMENT_TOKEN_TO_BE_REPLACED

This feature require that you enable JavaScript in your browser.
END_OF_DOCUMENT_TOKEN_TO_BE_REPLACED