Sex with Presidents: The Ins and Outs of Love and Lust in the White House (Paperback) 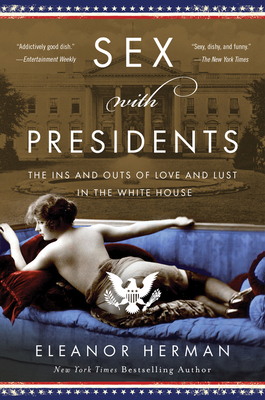 By Eleanor Herman
$17.99
Not Yet Published

In this fascinating work of popular history, the New York Times bestselling author of Sex with Kings and The Royal Art of Poison uncovers the bedroom secrets of American presidents and explores the surprising ways voters have reacted to their leaders’ sex scandals.

While Americans have a reputation for being strait-laced, many of the nation’s leaders have been anything but puritanical. Alexander Hamilton had a steamy affair with a blackmailing prostitute. John F. Kennedy swam nude with female staff in the White House swimming pool. Is it possible the qualities needed to run for president—narcissism, a thirst for power, a desire for importance—go hand in hand with a tendency to sexual misdoing?

In this entertaining and eye-opening book, Eleanor Herman revisits some of the sex scandals that have rocked the nation's capital and shocked the public, while asking the provocative questions: does rampant adultery show a lack of character or the stamina needed to run the country? Or perhaps both? While Americans have judged their leaders' affairs harshly compared to other nations, did they mostly just hate being lied to? And do they now clearly care more about issues other than a politician’s sex life?

What is sex like with the most powerful man in the world? Is it better than with your average Joe? And when America finally elects a female president, will she, too, have sexual escapades in the Oval Office?

Eleanor Herman is the New York Times bestselling author of Sex with Kings, Sex with the Queen, and several other works of popular history. She has hosted Lost Worlds for The History Channel, The Madness of Henry VIII for the National Geographic Channel, and is now filming her second season of America: Fact vs. Fiction for The American Heroes Channel.

"Herman adroitly exhibits her storytelling prowess in blending the documented gossip of the time with personal details from interviews and memoirs to write a book that is both historical and wildly entertaining."
— Library Journal

"At a moment when presidential sex scandals have few immediate consequences, this book will remind readers of the moral and political complexity of the topic while providing an entertaining introduction."
— Booklist

“Well researched…although humorous at times, Sex with Presidents does not water down some of the real miscreants who lived in the White House.”
— BookPage

This feature require that you enable JavaScript in your browser.
END_OF_DOCUMENT_TOKEN_TO_BE_REPLACED

This feature require that you enable JavaScript in your browser.
END_OF_DOCUMENT_TOKEN_TO_BE_REPLACED

This feature require that you enable JavaScript in your browser.
END_OF_DOCUMENT_TOKEN_TO_BE_REPLACED

This feature require that you enable JavaScript in your browser.
END_OF_DOCUMENT_TOKEN_TO_BE_REPLACED