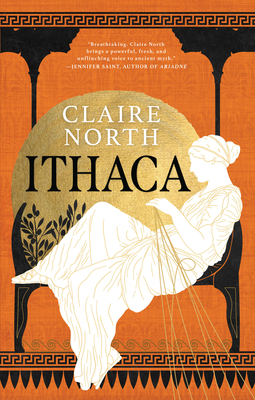 This is book number 1 in the Songs of Penelope series.

“Rich with detail and compelling characters, this gorgeously written novel left me brimming with warmth and courage. The often-misunderstood Hera provides a perfect lens for a faithful, unique, and satisfying retelling of a beloved story.”
— Julie Goodrich, Beaverdale Books, Des Moines, IA

This “dazzlingly complex, twisting tale” tells the story of Penelope of Ithaca, famed wife of Odysseus, and her time on an isle populated with abandoned women—and their goddesses—as they change the course of the world.

Seventeen years ago, King Odysseus sailed to war with Troy, taking with him every man of fighting age from the island of Ithaca. None of them has returned, and the women of Ithaca have been left behind to run the kingdom.

Penelope was barely into womanhood when she wed Odysseus. While he lived, her position was secure. But now, years on, speculation is mounting that her husband is dead, and suitors are beginning to knock at her door.

No one man is strong enough to claim Odysseus' empty throne—not yet. But everyone waits for the balance of power to tip, and Penelope knows that any choice she makes could plunge Ithaca into bloody civil war. Only through cunning, wit, and her trusted circle of maids, can she maintain the tenuous peace needed for the kingdom to survive.

From the multi-award-winning author Claire North comes a daring reimagining that breathes life into ancient myth and gives voice to the women who stand defiant in a world ruled by ruthless men. It’s time for the women of Ithaca to tell their tale . . .

Claire North is a pseudonym for Catherine Webb, who wrote several novels in various genres before publishing her first major work as Claire North, The First Fifteen Lives of Harry August. It was a critically acclaimed success, receiving rave reviews and becoming a word of mouth bestseller. She has since published several hugely popular and critically acclaimed novels, won the World Fantasy Award and the John W. Campbell Memorial Award, and been shortlisted for the Arthur C. Clarke Award and the Philip K. Dick Award. She lives in London.

"A dazzlingly complex, twisting tale....Claire North breathes life into a cast of mythical characters from goddesses to queens to slave-women in a richly nuanced portrayal of human life."—Jennifer Saint, author of Ariadne

"Richly poetic....An impassioned plea for the lost, disenfranchised queens of ancient Greece, a love letter to the silenced women of history who had to hide their pain behind their eyes and their skills, capabilities, and power behind false incompetence and ignorance."—Booklist

"Like Penelope at her loom, North weaves and unweaves, teasing out the threads of Homeric myth to recombine them into something unique, wonderful, and urgently contemporary."—M. R. Carey, author of The Girl With All the Gifts

"The queen of the gods narrates a crackling tale of secrets and intrigue...This is a ground-up view of Greek myth populated by spying maids, crafty merchants, and conniving queens. It’s taut, suspenseful, and full of Hera’s delightfully dyspeptic attitude. A thoroughly enjoyable exploration of Penelope’s side of the ancient story."
—Kirkus

"Penelope is a clever, complicated woman, who is doing the best she can in a very difficult, male-dominated world....North’s version of Hera compels a rethink about her place in these stories. And the final moments of Ithaca set up the following book very nicely indeed. This is my first Claire North novel, but not my last."—Locus

"A fantastical nightmare so skillfully sketched that it felt like truth. And when it was done, I simply didn't want to leave... Compelling [and] beautiful."—NPR Books on Notes from the Burning Age

"Consistently thoughtful fiction like this needs to be championed. I'll admit it, I'm a little in awe of the author. Her work is sublime.... Claire North deserves your undivided attention."—The Eloquent Page on 84K

"Claire North is a true original, a master of ingenious plotting and feats of imagination."—Alex Marwood, author of The Wicked Girls, on The Sudden Appearance of Hope

This feature require that you enable JavaScript in your browser.
END_OF_DOCUMENT_TOKEN_TO_BE_REPLACED

This feature require that you enable JavaScript in your browser.
END_OF_DOCUMENT_TOKEN_TO_BE_REPLACED

This feature require that you enable JavaScript in your browser.
END_OF_DOCUMENT_TOKEN_TO_BE_REPLACED

This feature require that you enable JavaScript in your browser.
END_OF_DOCUMENT_TOKEN_TO_BE_REPLACED