Temple of the Winds: Book Four of The Sword of Truth (Mass Market) 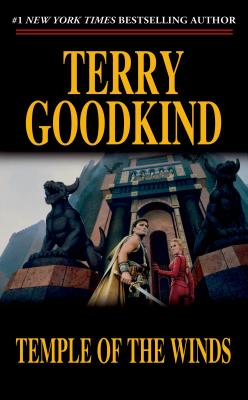 This is book number 4 in the Sword of Truth series.

On the red moon will come the firestorm...

Wielding the Sword of Truth, Richard Rahl has battled death itself and come to the defense of the D'Haran people. But now the power-mad Emperor Jagang confronts Richard with a swift and inexorable foe: a mystical plague cutting a deadly swath across the land and slaying thousands of innocent victims.

To quench the inferno, he must seek remedy in the wind...

To fight it Richard and his beloved Kahlan Amnell will risk everything to uncover the source of the terrible plague-the magic sealed away for three millennia in the Temple of the Winds.

Lightning will find him on that path...

But when prophecy throws the shadow of betrayal across their mission and threatens to destroy them, Richard must accept the Truth and find a way to pay the price the winds demand...or he and his world will perish.

Terry Goodkind (1948-2020) is a #1 New York Times bestselling author. His books include the multi-volume epic fantasy Sword of Truth series -- beginning with Wizard’s First Rule, the basis for the television show Legend of the Seeker -- and related series Richard and Kahlan and The Nicci Chronicles.

Goodkind was born and raised in Omaha, Nebraska, where he also attended art school. Alongside a career in wildlife art, he was also a cabinetmaker and a violin maker, and did restoration work on rare and exotic artifacts from around the world. In the 1990s he relocated to Nevada, where, when not writing novels, he was a racing-car enthusiast.

"Goodkind has the extraordinary ability to imbue rousing fantasy adventure with a rare emotional depth, once again exploring the power of love and forgiveness in a tour de force of mesmerizing storytelling." —RT Book Reviews

This feature require that you enable JavaScript in your browser.
END_OF_DOCUMENT_TOKEN_TO_BE_REPLACED

This feature require that you enable JavaScript in your browser.
END_OF_DOCUMENT_TOKEN_TO_BE_REPLACED

This feature require that you enable JavaScript in your browser.
END_OF_DOCUMENT_TOKEN_TO_BE_REPLACED

This feature require that you enable JavaScript in your browser.
END_OF_DOCUMENT_TOKEN_TO_BE_REPLACED