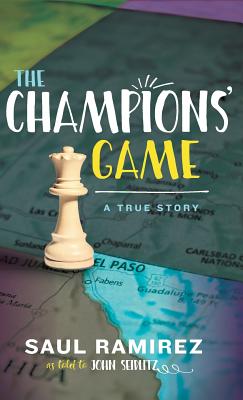 In April of 2015, a team of 12 middle schoolers--border kids--from South-Central El Paso surprised the country by taking first place in the national chess championships.

The 11, 12 and 13-year-old chess players at El Paso ISD's Henderson Middle School largely credit their success to one man: Saul Ramirez, a 30-year-old dad and husband who teaches art at Henderson during the day and coaches the chess team after school. The story of Ramirez and his students is chronicled in The Champions' Game, a testament to the resilience and spirit of children who dare to dream.

Many of the 700-plus students at Henderson Middle School come and go from across the border in Ju rez, where they live. A third of the students are English Language Learners, and over 96 percent are from low-income families, with all of the students at the school qualifying for the free lunch program.

For these kids, dreams of beating highly privileged students from "fancy" schools in upper-crust neighborhoods aren't on the radar. They have bigger issues to deal with in life. Which is why it borders on the miraculous that they choose to voluntarily--even enthusiastically--commit countless hours every week to the practice of a game that they had known virtually nothing about until two years ago when Ramirez started a chess club at Henderson.

Ramirez's genius is not so much the chess that he teaches (even though he's a former Texas state chess champion), but in his ability to intertwine life principles with chess rules to expand the minds, the insight and even the future possibilities of the students he teaches. The book's 14 chapters lay out Ramirez's rules for life--and chess, introducing concepts like guard your queen, control your center and protect your king.

Ramirez grew up in El Paso's Segundo Barrio, a neighborhood that might bring to mind Compton, or South Central, or 8 Mile, often noted as the poorest zip code in the United States. Ramirez seems to possess a singular ability to draw out the talents of his students, perhaps because chess is much more than just a game to him. In The Champions' Game, he writes,

"I want to start a revolution. A revolution of the mind. I want to do what was done for me by the people] who were always there for me when I was a child, guiding me, teaching me, showing me how to be a man, an artist, a teacher. I want to build children anew, from the mind up. That does not take genius. It takes love."

This feature require that you enable JavaScript in your browser.
END_OF_DOCUMENT_TOKEN_TO_BE_REPLACED

This feature require that you enable JavaScript in your browser.
END_OF_DOCUMENT_TOKEN_TO_BE_REPLACED

This feature require that you enable JavaScript in your browser.
END_OF_DOCUMENT_TOKEN_TO_BE_REPLACED

This feature require that you enable JavaScript in your browser.
END_OF_DOCUMENT_TOKEN_TO_BE_REPLACED