Coretta: My Life, My Love, My Legacy (Paperback) 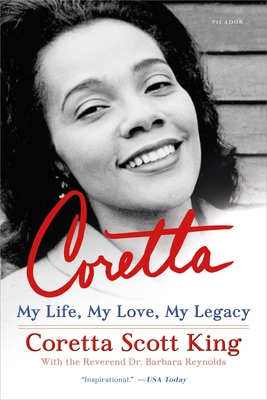 [Coretta: My Life, My Love, My Legacy] "reveals never-before-told aspects of Mrs. King’s life....We learn of the brilliant mind and courageous spirit behind the enigmatic figure” (Essence).

Born in 1927 to daringly enterprising parents in the Deep South, Coretta Scott had always felt called to a special purpose. While enrolled as one of the first black scholarship students recruited to Antioch College, she became politically and socially active and committed to the peace movement. As a graduate student at the New England Conservatory of Music, determined to pursue her own career as a concert singer, she met Martin Luther King Jr., a Baptist minister insistent that his wife stay home with the children. But, in love and devoted to shared Christian beliefs as well as shared racial and economic justice goals, she married Dr. King, and events promptly thrust her into a maelstrom of history throughout which she was a strategic partner, a standard-bearer, and so much more.

As a widow and single mother of four, she worked tirelessly to found and develop the King Center as a citadel for world peace; lobbied for fifteen years for a U.S. national holiday in honor of her husband; championed women’s, workers’, and gay rights; and was a powerful international voice for nonviolence, freedom, and human dignity.

"Distinctly...particularly absorbing" (Patricia J. Williams, The New York Times Book Review), Coretta’s is a love story, a family saga, and the memoir of an extraordinary black woman in twentieth-century America—a brave leader who, in the face of terrorism and violent hatred, stood committed, proud, forgiving, nonviolent, and hopeful every day of her life.

Coretta Scott King was an American civil rights activist, international human rights champion and author, the wife of Martin Luther King Jr., and the mother of four. Born in 1927 in Heiberger, Alabama, she died in 2006 in Rosarito Beach, Mexico.

Dr. Barbara Reynolds is an ordained minister, a columnist, and the author of several books, including Out of Hell & Living Well: Healing from the Inside Out. She was a longtime editorial board member of USA Today, won an SCLC Drum Major for Justice Award in 1987, and was inducted into the Board of Preachers at the 29th Annual Martin Luther King, Jr. International College of Ministers and Laity at Morehouse College in 2014.

“‘There is a Mrs. King. There is also Coretta. How one became detached from the other remains a mystery,’ King says. This book is distinctly Coretta’s story. . . particularly absorbing. . . .Living with terror is the threat that runs through ‘My Life’ . . . it is King's grounding in her husband's theology of peaceful resistance that enables her survival against excruciating odds.” —Patricia J. Williams, The New York Times Book Review

“This memoir shows Coretta Scott King . . . as a leader in her own right, as a dedicated pacifist, as a persistent adherent to principles of nonviolence, as a gritty fighter for her husband’s legacy, as a mother . . . . A great and inspirational read . . . .This book put steel in my spine.”—Julianne Malveaux, Pittsburgh Courier

“In [Coretta: My Life, My Love, My Legacy], legendary journalist Barbara Reynolds reveals never-before-told aspects of Mrs. King’s life . . . . We learn of the brilliant mind and courageous spirit behind the enigmatic figure.”—Essence

“The full life story of the civil rights activist and humanitarian is much more than just Dr. Martin Luther King, Jr.’s wife. . . . It is her commitment to bettering the world that will keep her story alive in our hearts.”—Ebony.com

“The portrait that emerges here is of a woman of tremendous faith, resilience and pride . . . . By the time she died, she’d fought for a lifetime of causes.”—New York Post

“An important heroine in her own right, Coretta Scott King’s story is mesmerizing.”—Read It Forward

“This account of family, faith, and activism . . . is told so genuinely that it leaves the impression of having heard the words directly from the late activist. . . . Highly recommended.”—Library Journal (starred review)

“King was undoubtedly a singular woman, and readers will be struck by just how strongly her exceedingly compelling story resonates today. She was much more than just the woman behind the man, and now, in the most eloquent of language, she proves that truth once and for all to generations of readers who will embrace her all over again.”—Booklist (starred review)

“Gracious, elegant . . . . A touching memoir from an important figure in the civil rights movement.”—Kirkus Reviews

“A spiritual narrative with God as a frequent directing presence . . . . ‘In reading this memoir, I hope somehow you see Coretta,’ King confides in the introduction. One does.”—Publishers Weekly

This feature require that you enable JavaScript in your browser.
END_OF_DOCUMENT_TOKEN_TO_BE_REPLACED

This feature require that you enable JavaScript in your browser.
END_OF_DOCUMENT_TOKEN_TO_BE_REPLACED

This feature require that you enable JavaScript in your browser.
END_OF_DOCUMENT_TOKEN_TO_BE_REPLACED

This feature require that you enable JavaScript in your browser.
END_OF_DOCUMENT_TOKEN_TO_BE_REPLACED