Night of the Raven, Dawn of the Dove (Hardcover) 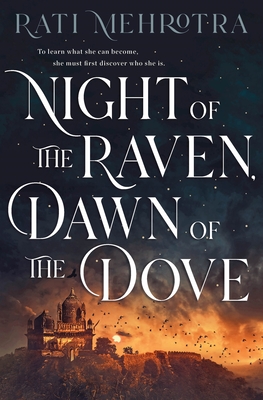 In Rati Mehrotra's YA fantasy novel Night of the Raven, Dawn of the Dove, a young guardswoman struggles with her unwitting role as a major pawn in the deadly games between two kingdoms in a monster-infested alternate medieval India.

Bound to the queen of Chandela by a forbidden soul bond that saved her when she was a child, Katyani has never fallen short of what’s expected of her—becoming the best guardswoman the Garuda has ever seen and an advisor to the crown prince when he ascends to the throne. But when the latest assassination attempt against the royals leaves them with a faceless body and no leads to the perpetrator, Katyani is unwillingly shipped off to guard the Chandela princes in Acharya Mahavir’s esteemed monastic school in Nandovana, a forest where monsters have roamed unchecked for generations.

Katyani wants nothing more than to return to her duties, especially when the Acharya starts asking questions about her past. The only upside of her stay are her run-ins with Daksh, the Acharya’s son, who can’t stop going on about the rules and whose gaze makes her feel like he can see into her soul. But when Katyani and the princes are hurriedly summoned back to Chandela before their training is complete, tragedy strikes and Katyani is torn from the only life she has ever known. Alone and betrayed in a land infested with monsters, Katyani must find the answers to her past so she can save what she loves and forge her own destiny.

Bonds can be broken, but debts must be repaid.

Born and raised in India, Rati Mehrotra now lives and writes in Toronto, Canada. She is the author of the Asiana duology: Markswoman and its sequel Mahimata. Her short fiction has been shortlisted for The Sunburst Award and has appeared in multiple venues including The Magazine of Fantasy & Science Fiction, Lightspeed Magazine, Apex Magazine, and Podcastle. She loves to cook; when not writing, she is often to be found in the kitchen, experimenting with new recipes.

"Night of the Raven, Dawn of the Dove is ambitious and filled with grisly battles, sinister monsters and forbidden magic. The novel's brisk pacing and escalating stakes create a gripping read, while Katyani's journey of self-discovery adds a universal coming-of-age element to the epic narrative. Fans of Sabaa Tahir's An Ember in the Ashes and Kristin Cashore's Graceling should enjoy this high fantasy adventure." - Shelf Awareness, starred review

"In her YA debut, Rati Mehrotra deftly weaves medieval India into a compelling high-fantasy world brimming with cunning spirits and blood-soaked betrayal. [...] Night of the Raven, Dawn of the Dove thrives on the fact that true monsters might not have fangs or claws but bear the faces of friends instead." - Quill and Quire, starred review

"Engaging storytelling and characters mix with intense, high-stakes political games in this imaginative portrait of high society in a medieval India beset by monsters. [...] Readers will root for this strong-willed, energetic heroine through the action-packed ending." - Booklist

"Mehrotra smoothly incorporates worldbuilding into the atmospheric narrative, highlighting themes of family and justice with a timeless blend of adventure, mystery, and romance. A satisfying stand-alone with classic appeal." - Kirkus

“Sensuous and action-packed…the world-building is masterfully presented. [A] fascinating story of secrets, betrayal, and the devastating cycle of revenge.” – Bulletin of the Center for Children's Books

“A dazzling and intricately woven story that bites as fiercely as it dazzles. From its complex cast to its decadent world building, I couldn’t put this book down.” - Adalyn Grace, New York Times bestselling author of All the Stars and Teeth

"A sweeping adventure set in a lush world, full of political intrigue and relationships found and lost. I loved it!" - Lauren Blackwood, New York Times bestselling author of Within These Wicked Walls

"Night of the Raven, Dawn of the Dove is the high fantasy novel I’ve been hungering for. An exciting, richly drawn world grounded in ancient Indian lore and tradition? Multifaceted monsters both human and otherwise? A sword-wielding heroine who must discard everyone else’s stories in order to find her own? Um, yes, please! Read this book." —Shveta Thakrar, author of the Andre Norton Nebula Award finalist Star Daughter

"Vividly imagined, lushly written, and bursting with memorable characters led by the stellar Katyani, Night of the Raven, Dawn of the Dove is an essential addition to the India-inspired fantasy library." - Samit Basu, writer of the Netflix film House Arrest and author of The City Inside

"Night of the Raven, Dawn of the Dove is a captivating, richly drawn fantasy story, full of twists and turns. It gripped me from the opening pages and never let go with a fantastic mix of palace intrigue, unique magic, action, and romance. It's everything I'm looking for in a fantasy novel." - L. Penelope, author of Song of Blood & Stone

“Rati Mehrotra’s Night of the Raven, Dawn of the Dove pulls you into an enthralling and perilous world on page one and doesn’t let you go until the very end. Captained by an unapologetically fierce heroine and sharp, page-turning dialogue, this tale about faith in one’s family and oneself is a must-read.” - Kylie Lee Baker, author of The Keeper of Night

This feature require that you enable JavaScript in your browser.
END_OF_DOCUMENT_TOKEN_TO_BE_REPLACED

This feature require that you enable JavaScript in your browser.
END_OF_DOCUMENT_TOKEN_TO_BE_REPLACED

This feature require that you enable JavaScript in your browser.
END_OF_DOCUMENT_TOKEN_TO_BE_REPLACED

This feature require that you enable JavaScript in your browser.
END_OF_DOCUMENT_TOKEN_TO_BE_REPLACED