The Girl In Green (Paperback) 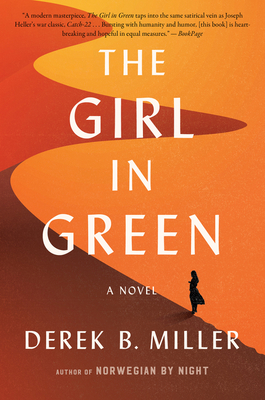 From the award-winning author of Norwegian by Night, a novel about two men on a misbegotten quest to save the girl they failed to save decades before.

1991: One hundred miles from the Kuwaiti border, Thomas Benton meets Arwood Hobbes. Benton is a British journalist who reports from war zones in part to avoid his lackluster marriage and a daughter he loves but cannot connect with; Arwood is an American private who might be an insufferable ignoramus or might be a genuine lunatic with a death wish—it's hard to tell.

Desert Storm is over, peace has been declared, but as they argue about whether it makes sense to cross the nearest border in search of an ice cream, they become embroiled in a horrific attack in which a young local girl in a green dress is killed as they are trying to protect her.

The two men walk away into their respective lives. But something has cracked for them both. Twenty-two years later, in another place, in another war, they meet again and are offered an unlikely opportunity to redeem themselves when that same girl in green is found alive and in need of salvation. Or is she?

Derek B. Miller is an American novelist, who worked in international affairs before turning to writing full-time. He is the author of five previous novels, all highly acclaimed: Norwegian by Night, The Girl in Green, American by Day, Radio Life and Quiet Time (an Audible Original). His work has been shortlisted for many awards, with Norwegian by Night winning the CWA John Creasey Dagger Award for best first crime novel, an eDunnit Award and the Goldsboro Last Laugh Award. How to Find Your Way in the Dark was a Finalist for the National Jewish Book Award and a New York Times best mystery of 2021.

Short-listed for the CWA Gold Dagger Award, "Best Crime Novel of the Year" One of Shelf Awareness' "Best Books of 2017"   "A modern masterpiece, The Girl in Green taps into the same satirical vein as Joseph Heller’s war classic, Catch-22... Miller... is well qualified to explore the tangled political, bureaucratic, cultural and religious issues at play in the Middle East. His tongue-in-cheek candor brings much-needed levity to the proceedings, making the difficult subject matter relatable and engaging. Bursting with humanity and humor, The Girl in Green is heartbreaking and hopeful in equal measures, delivering nail-biting suspense while bringing readers into the heart of the conflict in Iraq."—BookPage   “As daring in execution as imagination, this adventure tale crackles with heart, charm and dark honesty…Miller pulls off an amazing feat of alchemy here, because this chronicle of trauma, violence and endless conflict is the unlikely feel-good story of the year. Not only does he pepper the narrative with enough absurdist humor and one-liners to keep readers helplessly grinning at the darkest moments, he hits points of emotional resonance with the precision of a sniper. Miller understands the story readers most need…[His] style is an all-terrain vehicle...In Arwood and  Benton, readers will see the kind of big personalities that carry movie franchises...A word of advice: buy The Girl in Green rather than borrow it. With the proliferation of sharp one liners, occasional droplets of poetry like ‘the buzuq sings a song for which there will never be any words,’ and insightful distillations of the intricacies and contradictions of an American conflict that slides from phase to phase without ever ending, the urge to highlight and dog-ear will overcome even the most book-proud reader.”—Shelf Awareness   "A polished and powerful commentary on the effects of war on two men—an ambitious British journalist and a clueless American soldier who meet briefly in Iraq at the end of the Gulf War in 1991...This is an excellent depiction of the complicated Iraq-Syria situation, especially the desperate plight of refugees and the West’s failure to provide peace or relief. Miller caps his stellar, electrifying story with a knockout ending."—Publishers Weekly, starred and boxed review    "As in his acclaimed debut, Norwegian by Night (2013), Miller brilliantly blends offbeat reflection and dark emotion, using pop-culture references ranging from Ferris Bueller to Winnie the Pooh to underscore the killing ironies of war. A penetrating, poetic, and unexpectedly disarming book about the ageless conflict in the Middle East by a writer who has made that topic his specialty."—Kirkus Reviews, starred review     "[Miller's] decades of experience in international relations support this sympathetic portrayal of clashing cultures, but it is the vividly drawn, often quirky characters and timely plot that fascinate...VERDICT: Not to be missed, this is a compelling combination of literate storytelling and action-packed thriller laced with humor."—Library Journal, starred review   “Arwood and Benton are improbable knights-errant….[who] make thoroughly beguiling action-adventure heroes, and Miller’s knowledge of the chaotic and vicious Syrian civil war and the dogged efforts of NGO workers to care for the war’s refugees set the scene brilliant —

This feature require that you enable JavaScript in your browser.
END_OF_DOCUMENT_TOKEN_TO_BE_REPLACED

This feature require that you enable JavaScript in your browser.
END_OF_DOCUMENT_TOKEN_TO_BE_REPLACED

This feature require that you enable JavaScript in your browser.
END_OF_DOCUMENT_TOKEN_TO_BE_REPLACED

This feature require that you enable JavaScript in your browser.
END_OF_DOCUMENT_TOKEN_TO_BE_REPLACED