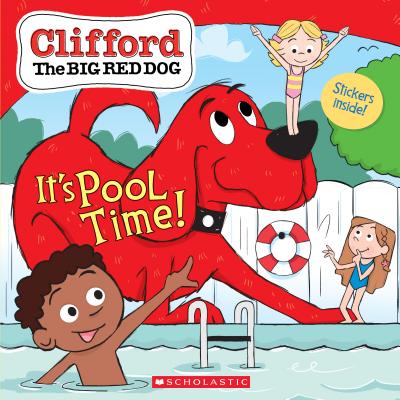 Clifford and Emily Elizabeth are spending a day at the pool!Emily Elizabeth wants to earn her Cool Kahuna Badge at the Birdwell Island pool. That means she has to swim across the pool using three different strokes, go down to the bottom of the deep end, and jump off the high dive! Clifford and his friends turn each part of the test into a game to help Emily Elizabeth practice. But on the day of the test, the high dive is broken! Can Clifford help save the day? Featuring adorable art from the new Clifford TV show and a full page of stickers!

Meredith Rusu is the author of more than 50 children's books, specializing in titles based on television and movies such as LEGO Ninjago, Peppa Pig, and Star Wars. She is also the author of The DATA Set series under the name Ada Hopper. Meredith lives in New Jersey with her husband and two young sons who provide much of the inspiration for her writing. When she isn't working, Meredith enjoys karaoke, spending time with family, and going on the occasional adventure or two.

Rémy Simard has illustrated many books for children. He is also the author of a series of graphic novels which is being adapted for television. Rémy has been shortlisted for a Governor General’s Award and is well known and regarded for his comic style. He lives in Montreal, Quebec.

Norman Bridwell was the author and illustrator of numerous children's books, including the beloved Clifford series. The delightful stories about a big red dog named Clifford and his friend, Emily Elizabeth, have sold over 126 million copies in 13 languages!

This feature require that you enable JavaScript in your browser.
END_OF_DOCUMENT_TOKEN_TO_BE_REPLACED

This feature require that you enable JavaScript in your browser.
END_OF_DOCUMENT_TOKEN_TO_BE_REPLACED

This feature require that you enable JavaScript in your browser.
END_OF_DOCUMENT_TOKEN_TO_BE_REPLACED

This feature require that you enable JavaScript in your browser.
END_OF_DOCUMENT_TOKEN_TO_BE_REPLACED