The Girl from Venice (Paperback) 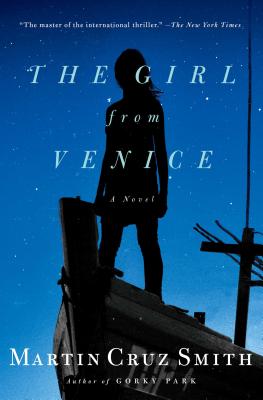 From Martin Cruz Smith, “a master of the international thriller” (The New York Times), a suspenseful World War II love story set against the beauty, mystery, and danger of occupied Venice.

Venice, 1945. The war may be waning, but the city known as La Serenissima is still occupied and the people of Italy fear the power of the Third Reich. One night, under a canopy of stars, a fisherman named Cenzo comes across a young woman’s body floating in the lagoon and soon discovers that she is still alive and in trouble.

Born to a wealthy Jewish family, Giulia is on the run from the Wehrmacht. Cenzo chooses to protect Giulia rather than hand her over to the Nazis. This act of kindness leads them into the world of Partisans, random executions, the arts of forgery and high explosives, Mussolini’s broken promises, the black market and gold, and, everywhere, the enigmatic maze of the Venice Lagoon.

With Martin Cruz Smith’s trademark suspense, action, and breathtaking romance during World War II Italy, The Girl from Venice is “a gripping evocation of a beautiful nation and of two people, trapped in the lunacy of war and the bravery it can inspire” (The Seattle Times).

Martin Cruz Smith’s novels include Gorky Park, Stallion Gate, Nightwing, Polar Star, Stalin’s Ghost, Rose, December 6, Tatiana, The Girl from Venice, and The Siberian Dilemma. He is a two-time winner of the Hammett Prize, a recipient of the Mystery Writers of America’s Grand Master Award and Britain’s Golden Dagger Award, and a winner of the Premio Piemonte Giallo Internazionale. He lives in California.

“Evocative . . . Smith conjures the time and place with a generous dose of what the novelist Evan Connell called ‘luminous details.’ . . . The Girl from Venice’s vivid treatments of a timeless trade and certain little-known aspects of World War II make it well worth your time.” —Dennis Drabelle, The Washington Post

“You think you've read every permutation of a World War II novel possible—then along comes a Venetian fisherman and his unlikely first mate, a beautiful Jewish teenaged girl on the run from the last few Nazis occupying Italy. . . . Suspense, romance, spying, action—this novel has a little bit of everything, and it works. Cruz Smith is a master of quick scene changes . . . [who] has chosen, in The Girl from Venice, to put aside his usual spy stories for a straightforward wartime chase-cum-romance, a slice of La Serenissima life so perfectly researched that details melt into action like the local goby fish into risotto.” —Bethanne Patrick, NPR

“Martin Cruz Smith is a master of the international thriller.” —The New York Times

“Smith is that uncommon phenomenon: a popular and well-regarded crime novelist who is also a writer of real distinction. His prose is clear, precise, and unobtrusively elegant, and his sense of character is unerring.” —The Washington Post

“With the recent death of the reigning master of the suspense novel, Elmore Leonard, to whom do we turn in the hopes of a masterly glide through dire straits in the dark side of life, with pitch-perfect dialogue, intriguing characters, and a plot with punchy turns and a satisfying twist? My candidate would be California writer Martin Cruz Smith.” —Alan Cheuse, The Dallas Morning News

This feature require that you enable JavaScript in your browser.
END_OF_DOCUMENT_TOKEN_TO_BE_REPLACED

This feature require that you enable JavaScript in your browser.
END_OF_DOCUMENT_TOKEN_TO_BE_REPLACED

This feature require that you enable JavaScript in your browser.
END_OF_DOCUMENT_TOKEN_TO_BE_REPLACED

This feature require that you enable JavaScript in your browser.
END_OF_DOCUMENT_TOKEN_TO_BE_REPLACED