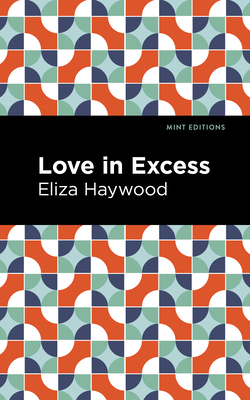 Love in Excess (1719-1720) is a novel by Eliza Haywood. Published in three parts by printer William Chetwood, the novel marked Haywood' debut on the London literary scene. It was an immediate bestseller, going through several reprintings in Haywood's lifetime. Love in Excess is considered a prime example of the popular genre of amatory fiction, which often used love triangles to expose the imbalance between male and female desire in a patriarchal society. Like all young aristocratic women of their time, Alovisa and Amena are expected to wait for a marriage proposal to fall into their laps. Forbidden from expressing her desires, Alovisa decides to send an anonymous letter to the handsome, rakish D'Elmont. When he receives it, however, he thinks it has been sent by Amena, whom her promptly begins to pursue. Disappointed, Alovisa conspires with Amena's father--who disapproves of D'Elmont--to have her rival sent to a convent. Although Alovisa ends up with her beau of choice, she soon realizes that desire has a funny way of concealing a lover's true nature. With a beautifully designed cover and professionally typeset manuscript, this edition of Eliza Haywood's Love in Excess is a classic of English literature reimagined for modern readers.

This feature require that you enable JavaScript in your browser.
END_OF_DOCUMENT_TOKEN_TO_BE_REPLACED

This feature require that you enable JavaScript in your browser.
END_OF_DOCUMENT_TOKEN_TO_BE_REPLACED

This feature require that you enable JavaScript in your browser.
END_OF_DOCUMENT_TOKEN_TO_BE_REPLACED

This feature require that you enable JavaScript in your browser.
END_OF_DOCUMENT_TOKEN_TO_BE_REPLACED