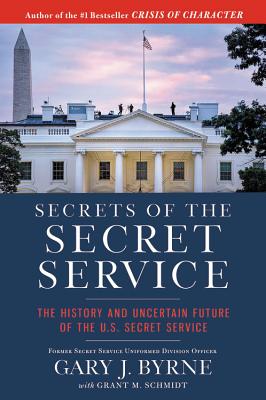 
From the author of the #1 New York Times bestseller CRISIS OF CHARACTER comes an explosive new exposé of the Secret Service.
The United States Secret Service is tasked with protecting our Presidents, their families, and the complex in which they live and work. Given this important mission, world stability rests upon the shoulders of its agents.
In his new book, former Secret Service officer Gary Byrne takes readers behind the scenes to understand the agency's history and today's security failings that he believes put Americans at risk
The American public knows the stories of Secret Service heroism, but they don't know about the hidden legacy of problems that have plagued the agency ever since its creation.
Gary Byrne says that decades of catastrophic public failures, near misses, and bureaucratic and cultural rot threaten to erode this critical organization from the inside out.
Today, as it works to protect President Trump, the Secret Service stands at a crossroads, and the time needed to choose the right course is running out. Agents and officers are leaving the Secret Service in droves, or they're being overworked to the point where they lose focus on the job. Management makes decisions based on politics, not the welfare of their employees.
Byrne believes that this means danger for the men and women of the Secret Service, danger for the President they protect, and danger for the nation. In this book, he shares what he has witnessed and learned about the Secret Service with the hope that the problems of this most important agency can be fixed before it's too late.

GARY J. BYRNE served in federal law enforcement for nearly thirty years, in the U.S. Air Force Security Police, the Uniformed Division of the Secret Service, and most recently as a Federal Air Marshal. In his first book, #1 New York Times bestseller CRISIS OF CHARACTER, he shared his experiences as the first Secret Service employee compelled to testify in a criminal case against a sitting U.S. president.
GRANT M. SCHMIDT, a Temple University graduate, is an entrepreneur and writer in the Philadelphia area.

Praise for Crisis of Character:
"I read it cover to cover!"
—Sean Hannity, Fox News Channel

"The book is worth reading to better understand the ways people who possess great power but lack character can abuse good public servants. Mr. Byrne's reporting on the flaws of the Federal Air Marshalls Service is also eye-opening - and scary."
—Fred J. Eckert, The Washington Times

"Hillary Clinton has a 'Jekyll and Hyde' personality that left White House staffers scared stiff of her explosive - and even physical - outbursts, an ex-Secret Service officer claims in a scathing new tell-all."
—New York Post

"Byrne reveals what he observed inside the White House while protecting the First Family in the 1990s."
—The Drudge Report

"[Crisis of Character] validates the public's growing distrust of Hillary's character. It reminds us of the Clintons' countless scandals and the deficits in their leadership. It is a message from someone who knew them personally, and it is a message we would do well to heed."
—Townhall.com

"Byrne is a former Secret Service officer who has written a tell-all book, "Crisis of Character," about the (horrible/embarrassing/appalling) things he purportedly witnessed during the Bill Clinton presidency."
—Gail Collins, New York Times

"Byrne's What-the-Butler-Saw style account is particularly damning [...] so much of his testimony rings true based on what the world knows about goings-on at the Clinton White House. [...] Byrne [says] that it is his 'patriotic duty' to ensure voters know the unvarnished truth about the Clintons."
—The Daily Mail

"Former Secret Service officer Gary Byrne offers a ground-zero look at the Lewinsky scandal - and other Bill Clinton misadventures that should have been national scandals - in his new book Crisis of Character. Even though top Clinton White House officials have confirmed Byrne was an honorable officer, the Clinton machine has been working to pressure television networks into ignoring the news and helping Hillary Clinton's campaign by not reporting on the details contained within Byrne's bombshell book."
—Breitbart.com

This feature require that you enable JavaScript in your browser.
END_OF_DOCUMENT_TOKEN_TO_BE_REPLACED

This feature require that you enable JavaScript in your browser.
END_OF_DOCUMENT_TOKEN_TO_BE_REPLACED

This feature require that you enable JavaScript in your browser.
END_OF_DOCUMENT_TOKEN_TO_BE_REPLACED

This feature require that you enable JavaScript in your browser.
END_OF_DOCUMENT_TOKEN_TO_BE_REPLACED