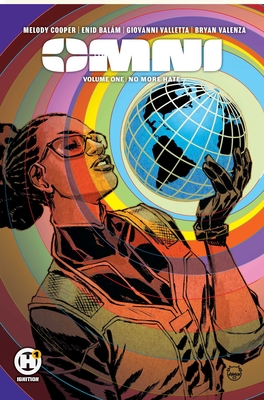 A young African-American doctor suddenly and mysteriously gains incredible abilities that put her at the forefront of human evolution.

Dr. Cobbina, able to think at the speed of light and instantly diagnose any situation, heads an enigmatic corporation known only as OMNI, giving her the resources she needs to search for others like her. She’s on a quest to learn the origin of her new powers—but, along the way, discovers that the fate of the entire world may rest on her shoulders!

Currently story editor on the 22nd season of NBCUniversal’s Law & Order: SVU, Melody was previously staff writer on the second season of Two Sentence Horror Stories, currently airing on Netflix (episodes "Quota" and "Ibeji"). Melody is currently developing a sci fi horror TV pilot in the Sundance Episodic Lab's new Idea Lab, and has been named one of the Top 25 Screenwriters to Watch in 2021 by the International Screenwriters Association. She was a 2019 HBO Access Writing Fellow and a winner of a Grand Jury Prize for Best Screenplay at the Urbanworld Film Festival. Melody has been a Fellow at several labs, including Shudder Labs, Stowe Story Labs (winner of the Tangerine Entertainment Fellowship) and NY Stage & Film. Also an award-winning playwright, Melody received a Ford Foundation grant to travel to Rwanda to develop her play Sweet Mercy, which was later developed by NY Stage and Film, starring Danai Gurira. Her play Day of Reckoning, about Lucy Parsons and the early Labor Movement in America, was produced in NY and won the Jane Chambers Award. Melody writes the comic book OMNI about a young Black woman doctor with super intelligence (Vol. 2: Issues #5 - 10) published by Mark Waid at Humanoids. She co-founded the group of women horror writers and filmmakers called NYX Horror Collective, and is developing an original horror feature with Fear Works that she will direct in Canada.

Enid currently lives in México city and has his Master's in Artistic Production at the Autonomous University (MaPA) of the State of Morelos, México. His graphic work mostly explores the idea of the future, presenting us with the perception of a fore-coming age of ruins, the morning after the great disaster: the end of humanity as we know it. In this obsession to inquire about cataclysm, Enid offers us visions of a conglomerate world, a melting pot of cultures located on a planet in misery; his drawings describe a Third World futurism. Before becoming a full artist, developing his skills as penciller and inker, Enid worked as a colorist for Delcourt. In 2018, he finished his first graphic novel as an author, Someday Comes Paradise, commissioned by an L.A. private studio. Currently he is working for Delcourt, Humanoids, and Sergio Bonelli publishing house in Italy.

Born in Caracas Venezuela, Giovanni attended the Caracas institute of Design to study Illustration and also took sculpting classes at Centro Art with Illustrator and sculptor Jesus Pastore. After graduating from the Kubert School in 2010, Giovanni began working for Tell-A-Graphics doing projects for PS Magazine under the great Joe Kubert and as a background artist for various artists in the industry. His work has been published by Marvel (X-men Blue, X-men Gold), Dynamite entertainment (Pathfinder-Tarzan, John Wick, James Bond), BOOM! studios (Eternal), Darkhorse presents ( The White Suits. He has also worked for a successful kickstarter project called Bleedback. He has been teaching at the Kubert school since 2012.

"The Future of Comics.”
— HOLLYWOOD REPORTER

"Cecelia is a confident and engaging character that you immediately want to see succeed."
— THE NEW YORK TIMES

“If you are bored of the standard capes and cowls narratives from the Big 2 publishers and fancy something different, then Omni and the Ignition Universe is for you.”
— MONKEYS FIGHTING ROBOTS

“The art by Alitha E. Martinez is fantastic.”
— GRAPHIC POLICY

This feature require that you enable JavaScript in your browser.
END_OF_DOCUMENT_TOKEN_TO_BE_REPLACED

This feature require that you enable JavaScript in your browser.
END_OF_DOCUMENT_TOKEN_TO_BE_REPLACED

This feature require that you enable JavaScript in your browser.
END_OF_DOCUMENT_TOKEN_TO_BE_REPLACED

This feature require that you enable JavaScript in your browser.
END_OF_DOCUMENT_TOKEN_TO_BE_REPLACED