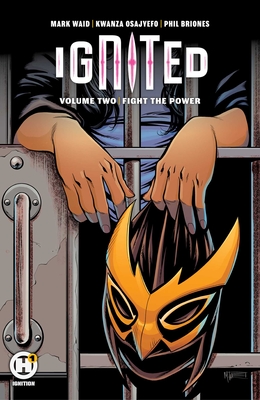 The lives of six teenagers changed forever when a high school shooting tore through the lives of everyone they know. Now ignited with strange super powers, they have a chance to become true agents of change in an America systemic with injustice.

Six superpowered kids have been working anonymously for social justice, but when they’re doxxed on live television, they become targets for the authorities and their families are hurled into danger! Fight the Power is the story of kids given the ability to affect real change in society—and the responsibilities that come along with it.

Mark Waid is a New York Times-bestselling author whose work has appeared in countless languages across the globe. Over the course of his almost four decades in the comic book industry, Mark has developed characters and stories for Batman, Superman, Spider-Man, The Avengers, X-Men, Iron Man, Wonder Woman, Daredevil and almost every other franchise currently enjoying success across all media platforms. Kingdom Come, which he co-created for DC Comics, has become one of the highest-selling graphic novels in history. Many of the storylines and characters he wrote and created in his eight-year run on The Flash comic books can be seen every week on the current hit television show. He has written and edited over 2,000 comic titles and has received every major award in the industry.

​Starting his career as an intern at Marvel Entertainment, Kwanza worked his way up in the comics industry to eventually launch DC Comics’ first webcomics imprint, and drafted the blueprints for their digital comics initiative. He recently made a splash in the creative pool launching a crowdfund for what became the critically acclaimed BLACK – a graphic novel that asked the question: what if only black people had superpowers?​

Philippe Briones is a French Artist who first started his career at Disney animation Studios, where he contributed to 9 movies over a decade (Hercules, Tarzan, Kuzco, Emperor’s New Groove…). His French career as an author started with successful titles such as La Geste des Chevaliers Dragons and Kookaburra. He has released about fifteen titles in Europe. His first US comics contract was signed with Marvel. He worked on Iconic characters such as Iron-Man, Spiderman, X-Men, or Captain America. He was then approached by DC Comics to work on ongoing series such as Suicide Squad, Aquaman, Batman Detective Comics or Justice League and Justice League Odyssey.

"An impressive mix of diverse talents, in terms of experience and outlook, united by talent and the shared universe they’ll create together."
— THE HOLLYWOOD REPORTER

"If superhero comics have a responsibility to reflect our real world, then superhero comics featuring teenage characters have more to reckon with than ever before… Humanoids’ nascent superhero universe is confronting gun violence in schools head on with Ignited.”
— PASTE MAGAZINE

"...a satirical sensibility that is unexpected in a comics marketplace that sometimes feels dominated by overwrought and gritty gloom."
— COMICS BEAT

This feature require that you enable JavaScript in your browser.
END_OF_DOCUMENT_TOKEN_TO_BE_REPLACED

This feature require that you enable JavaScript in your browser.
END_OF_DOCUMENT_TOKEN_TO_BE_REPLACED

This feature require that you enable JavaScript in your browser.
END_OF_DOCUMENT_TOKEN_TO_BE_REPLACED

This feature require that you enable JavaScript in your browser.
END_OF_DOCUMENT_TOKEN_TO_BE_REPLACED