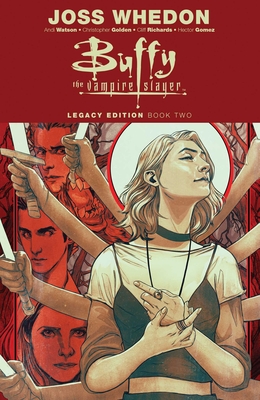 The definitive collection of every Buffy the Vampire Slayer comic, for the first time presented in publication order, continues in this all-new volume.

Set during the third season of the Buffy The Vampire Slayer television series, discover the untold stories of the Scoobies during the most dangerous time ever - their final year at Sunnydale High! As if finals and the threat of further education weren’t bad enough, Buffy & her friends will have to fight superpowered vampires and doppelgängers, all at the whim of the terrifying Big Bad Selke!

And let’s not forget the homework.

Collects Buffy The Vampire Slayer #11-19 (Dark Horse Comics), as well as short stories from the era, including “Bad Dog,” the first comic work by screenwriter/director and Buffy alum Douglas Petrie

Legacy Editions collect for the first time every issue of the most popular BOOM! Studios series in chronological order, in a newly designed, value priced format.

Whedon co-wrote for the Pixar animated film Toy Story (1995) (for which he was nominated for the Academy Award for Best Original Screenplay), wrote and directed the Firefly film continuation Serenity (2005), co-wrote and directed the Internet miniseries Dr. Horrible's Sing-Along Blog (2008), and co-wrote and produced the horror comedy film The Cabin in the Woods (2012). He wrote and directed the Marvel Cinematic Universe superhero films The Avengers (2012) and its sequel Avengers: Age of Ultron (2015), and also co-wrote the script for the DC Extended Universe superhero film Justice League (2017). He also served as director for Justice League on re-shoots, replacing Zack Snyder (who retained directorial credit).

This feature require that you enable JavaScript in your browser.
END_OF_DOCUMENT_TOKEN_TO_BE_REPLACED

This feature require that you enable JavaScript in your browser.
END_OF_DOCUMENT_TOKEN_TO_BE_REPLACED

This feature require that you enable JavaScript in your browser.
END_OF_DOCUMENT_TOKEN_TO_BE_REPLACED

This feature require that you enable JavaScript in your browser.
END_OF_DOCUMENT_TOKEN_TO_BE_REPLACED