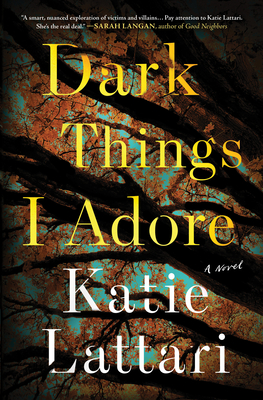 "[C]areful and sinewy plotting, which reveals in chilling detail who gets to make art, and who gets subsumed in the process."—New York Times Book Review

A debut thriller for fans of Lucy Foley and Liz Moore, Dark Things I Adore is a stunning Gone Girl-esque tale of atonement that proves that in the grasp of manipulative men, women may momentarily fall. But in the hands of fierce women, men will be brought to their knees.

Three campfire secrets. Two witnesses. One dead in the trees. And the woman, thirty years later, bent on making the guilty finally pay.

1988. A group of outcasts gather at a small, prestigious arts camp nestled in the Maine woods. They're the painters: bright, hopeful, teeming with potential. But secrets and dark ambitions rise like smoke from a campfire, and the truths they tell will come back to haunt them in ways more deadly than they dreamed.

2018. Esteemed art professor Max Durant arrives at his protégé's remote home to view her graduate thesis collection. He knows Audra is beautiful and brilliant. He knows being invited into her private world is a rare gift. But he doesn't know that Audra has engineered every aspect of their weekend together. Every detail, every conversation. Audra has woven the perfect web.

Only Audra knows what happened that summer in 1988. Max's secret, and the dark things that followed. And even though it won't be easy, Audra knows someone must pay.

A searing psychological thriller of trauma, dark academia, complicity, and revenge, Dark Things I Adore unravels the realities behind campfire legends—the horrors that happen in the dark, the girls who become cautionary tales, and the guilty who go unpunished. Until now.

"A smart, nuanced exploration of victims and villains, inspiration and theft, and the intersection of these things, in every artist. Pay attention to Katie Lattari. She's the real deal."—Sarah Langan, author of Good Neighbors

"Careful and sinewy plotting, which reveals in chilling detail who gets to make art, and who gets subsumed in the process." — New York Times Book Review

"Gorgeous and absorbing, Dark Things I Adore is a stunningly executed tale of art, trauma and revenge. At once propulsive in plot and lyrical in style, it's the kind of novel you'll want to savor every sentence of—dark and deeply satisfying." — Katie Lowe, author of The Furies and Possession

"Pulsing with seductive menace, Dark Things I Adore is a beautiful package, set to explode." — Eliza Jane Brazier, author of If I Disappear

"Dark Things I Adore is a captivating story about desire, ambition, and revenge. It takes the reader on a dark, twisted journey with prose so lush it will make you weep. The pace is so intense and fraught it had me turning pages long into the night. Everything about this I adored. Katie Lattari is a masterful storyteller who paints with her words on a unique canvas that will stay with you long after the story comes to its unexpected end." — Leslie Zemeckis, actress, writer, and award-winning documentarian

"A dark tale of relationships, ambition, and revenge." — Kirkus

"Dark Things I Adore combines suspense and mystery with the art world in a dynamic and atmospheric debut." — New York Journal of Books

"Dark Things I Adore is one of the most interesting psychological thriller tales of revenge I have read in quite some time... a nerve-wracking ride." —The Book Reporter

"A smart, nuanced exploration of victims and villains, inspiration and theft, and the intersection of these things, in every artist. Pay attention to Katie Lattari. She's the real deal." — Sarah Langan, author of Good Neighbors

"I felt like I was being physically pulled into a dark forest while reading this psychological cat-and-mouse game, always aware that more danger lay ahead. With a constant sense of foreboding and lush imagery, Dark Things I Adore is a haunting, mesmerizing tour de force, everything about it a brutal sort of beauty." — Zoje Stage, USA Today and internationally bestselling author of Baby Teeth and Getaway

This feature require that you enable JavaScript in your browser.
END_OF_DOCUMENT_TOKEN_TO_BE_REPLACED

This feature require that you enable JavaScript in your browser.
END_OF_DOCUMENT_TOKEN_TO_BE_REPLACED

This feature require that you enable JavaScript in your browser.
END_OF_DOCUMENT_TOKEN_TO_BE_REPLACED

This feature require that you enable JavaScript in your browser.
END_OF_DOCUMENT_TOKEN_TO_BE_REPLACED