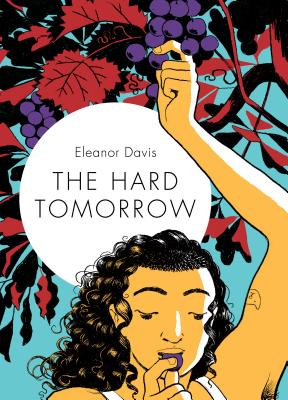 Winner of the LA Times Book Prize for Best Graphic Novel! 30 best of the year and best of the decade nods from The Guardian, Wired, NPR, and more!

Hannah is a thirty-something wife, home-health worker, and antiwar activist. Her husband, Johnny, is a stay-at-home pothead working—or "working"—on building them a house before the winter chill sets in. They're currently living and screwing in the back of a truck, hoping for a pregnancy, which seems like it will never come. Legs in the air, for a better chance at conception, Hannah scans fertility Reddits while Johnny dreams about propagating plants—kale, tomatoes—to ensure they have sufficient sustenance should the end times come, which, given their fragile democracy strained under the weight of a carceral state and the risk of horrible war, doesn’t seem so far off. Helping Hannah in her fight for the future is her best friend Gabby, a queer naturalist she idolizes and who adores her. Helping Johnny build the house is Tyler, an off-the-grid conspiracy theorist driven sick by his own cloudy notions of reality.

Told with tenderness and care in an undefined near future, Eleanor Davis's The Hard Tomorrow blazes unrestrained, as moments of human connection are doused in fear and threats. Her astute projections probe at current anxieties in a cautionary tale that begs the question: What will happen after tomorrow?

Eleanor Davis is a cartoonist and illustrator. Her books include How to Be Happy, You and a Bike and a Road, Why Art?, and The Secret Science Alliance and the Copycat Crook. She lives in Athens, Georgia.

“The virtuosic Eleanor Davis delves into a story of intimacy, connection and concreteness...Davis’ art, more gorgeous than ever, lends every simple moment glorious significance.”—NPR Best Books of 2019

“The Hard Tomorrow feels as immediate as the news on your Facebook feed and as timeless as Victor Hugo...A beautiful comic that speaks like no other book I read this year to how hard 2019 has been on hope, and why so many of us still have some.”—Slate Best Books of 2019

“Eleanor Davis is one of the very best cartoonists working today.”—The New York Review of Books

“Graphic novelist Eleanor Davis’s acclaimed book about a health worker and her pothead husband trying to conceive in a world tottering towards collapse.”—The Guardian

“The way [Eleanor Davis] draws and writes about the lives of Hannah, an activist, and Johnny, a pothead, gives the form its due, creating a beautiful story from the horrible worries that plague everyone of child-bearing age.”—The Boston Globe

“The Hard Tomorrow offers a well-observed and at times suspenseful character study of two people trying to face the future.”—Atlanta Journal Constitution

“The question of just what can be made of the future, and whether anything is worth fighting for, haunts the book… pure possibility and potential, and all the anxiety and hope that comes with it.”—Hyperallergic

“In The Hard Tomorrow, Davis uses crisp, deep blacks and pure whites for characters who are equally solid in their convictions.”—Lit Hub

“[The Hard Tomorrow] looks at a bleak and very familiar near-future to tell a story about activism, empathy, and believing in a better world… Davis captures facial expressions, body language, and gestures with curving, wiry lines that imbue the artwork with both spontaneity and grace.”—The AV Club

“Davis’s subtle take on a major philosophical question is an efficient and affective read for anyone struggling to find purpose in trying times.”—Library Journal

“[The Hard Tomorrow] is a very kind book. It's a very loving book, It is a very optimistic book, despite it being a very harsh world that they're living in.”—The Hollywood Reporter

"The Hard Tomorrow makes me feel understood, and it’s a reminder that even if everything is awful, much is beautiful. The world renews itself, over and over. Spring, at least, will come. We keep going."—Vox

“You want to read a story that will put your heart through a wringer? You want characters of all kinds – among both the oppressors and the oppressed, as well as history’s wannabe disinterested bystanders – who are encountered in fully human, alive-and-breathing detail? Then you want to read this book.”—Austin Chronicle

“Davis, who has a sublime illustration style, packs all these themes [modern day anxiety, political unrest] into a pretty short book; in less-skilled hands they would clash.”—The Toronto Star

“I’ve always been a massive fan of Eleanor Davis and her impressive range of drawing styles, but this book completely stole my heart in both story and artwork.”—Comics Beat, Best of 2019

“A beautiful, character-driven, novel-like story of how people move on and even find beauty when it seems impossible to do either.”—Booklist, starred review

This feature require that you enable JavaScript in your browser.
END_OF_DOCUMENT_TOKEN_TO_BE_REPLACED

This feature require that you enable JavaScript in your browser.
END_OF_DOCUMENT_TOKEN_TO_BE_REPLACED

This feature require that you enable JavaScript in your browser.
END_OF_DOCUMENT_TOKEN_TO_BE_REPLACED

This feature require that you enable JavaScript in your browser.
END_OF_DOCUMENT_TOKEN_TO_BE_REPLACED