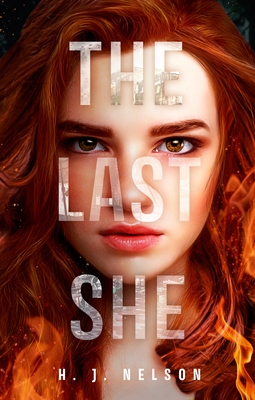 This is book number 1 in the The Last She series series.

As the only female to survive the devastating virus, Ara hasn’t seen another human in months—not since her father disappeared. The plague has swept away humanity, and Ara’s world is desolate, haunted by the ghosts of her former life. Her mother. Her sister.

Kaden and his crew live by a code: stay alert, stay alive. When they catch Ara stealing from them, they are furious—and confused. She is the first girl they have seen in three years. And while Kaden knows taking her captive is wrong, he tells himself he’s doing it to protect her.

But with Ara determined to follow through on her father’s mission—Go back to the beginning. End the plague—Kaden becomes mesmerized by Ara’s will and beauty. He knows he will do anything to help her, even if it tears their worlds apart.

H.J. Nelson is an Idaho native who graduated from University of Wisconsin with degrees in Creative Writing and Wildlife Biology. She began writing on Wattpad in 2015, where her story The Last She was one of the most read science fiction stories in 2016 and 2017. Since then her works have been optioned for television by Sony and garnered over twelve million reads. She has also written for brands like General Electric, Writer's Digest, and National Geographic. When not writing, Nelson has lived on a boat in the British Virgin Isles, worked in two zoos and ridden an elephant through the jungles of Laos— though she considers raising two daughters her most dangerous adventure yet. You can sign up for her newsletter at hjnelsonauthor.com, or find her on Instagram at @h.j.nelson.

This feature require that you enable JavaScript in your browser.
END_OF_DOCUMENT_TOKEN_TO_BE_REPLACED

This feature require that you enable JavaScript in your browser.
END_OF_DOCUMENT_TOKEN_TO_BE_REPLACED

This feature require that you enable JavaScript in your browser.
END_OF_DOCUMENT_TOKEN_TO_BE_REPLACED

This feature require that you enable JavaScript in your browser.
END_OF_DOCUMENT_TOKEN_TO_BE_REPLACED