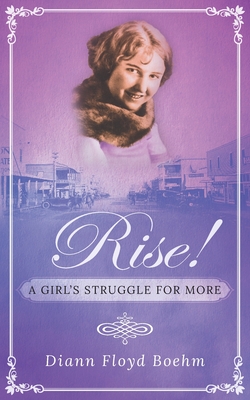 Rise A Girl's Struggle for More is an old-fashioned, historical family drama-a sweet, yet edgy, coming of age story. Set in the 1920s, it is based on the life of the author's grandmother.

The main character, Ruby Pearl, is mature beyond her years and was born at least a decade too soon. Growing up in the middle of a family of nine children in Oilton, Oklahoma, with her nose constantly in a book, she was known as the girl that would rather read than can tomatoes. Ruby feels destined for greater things.

Ruby studies hard to make good grades, while her parents smile and humor her. They continually encourage the courtship with her beau, Arthur, who they fully expect will be their son-in-law when the two graduate from high school, but Ruby has loftier goals. She admires her momma and big sister, Rilla, the "CEOs of the household" and knows some day she will have children and a home of her own to manage, but first things first

Rise A Girl's Struggle for More is Anne of Green Gables meets the "It Girl" of the 20s ... but with a sophisticated twist. Ruby's 'coming of age' story evolves amidst the backdrop of a horse and buggy town welcoming its first motor cars, and parents brought up in the Victorian era grappling with their daughters showing their ankles and dating Following the inspiration of the suffrage movement, Ruby becomes a pioneer for girls her age, breaking all norms, defying tradition (and her parents) to become a truly independent woman.

This feature require that you enable JavaScript in your browser.
END_OF_DOCUMENT_TOKEN_TO_BE_REPLACED

This feature require that you enable JavaScript in your browser.
END_OF_DOCUMENT_TOKEN_TO_BE_REPLACED

This feature require that you enable JavaScript in your browser.
END_OF_DOCUMENT_TOKEN_TO_BE_REPLACED

This feature require that you enable JavaScript in your browser.
END_OF_DOCUMENT_TOKEN_TO_BE_REPLACED