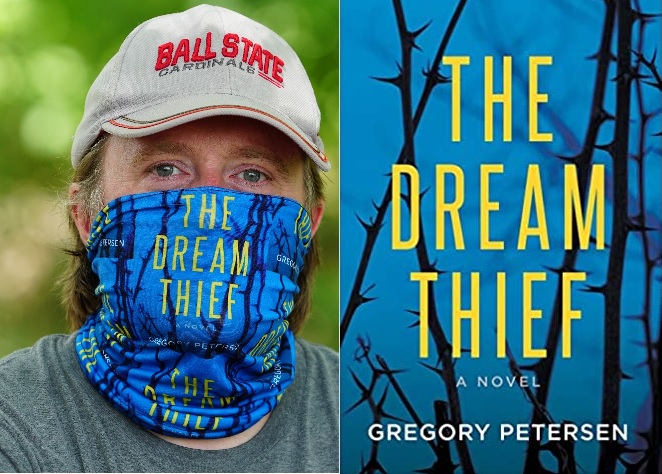 Join us for a Virtual Pop-Up Author Bookclub via Zoom with The Dream Thief author Gregory Petersen on June 19th from 6:00pm - 7:00pm!

In The Dream Thief, Nadine Brier is certain of only two things: the voice she heard is real, and her friend needs her. Everything else is too overwhelming.

This is not the first time Renee has called out in such a miraculous way. The last time--many years ago--had Nadine not acted quickly, Renee would have been killed. Now, decades removed from her magical early years, Nadine sets off on another adventure, and begins to drive from a small town in Missouri to New York City. During her adventure within The Dream Thief, she sees undeniable signs of her extraordinary childhood which tells her that either the wonder of the world she knew growing up was not imaginary, or she is losing her mind.

Both possibilities terrify her.

Gregory Petersen is the author of Open Mike, Dancing with the Locust, and The Dream Thief. He got his first professional writing gig at the age of 19 and was the 2017 recipient of the Midwest Writers Workshop's "Manny Award". Gregory is very active in coaching the softball team Toastmasters. He is a graduate of Ohio University's Scripps College of Communication and is a current student at Ball State University. Gregory currently resides in Cincinnati, OH.

The Dream Thief -A Novel (Paperback)

This feature require that you enable JavaScript in your browser.
END_OF_DOCUMENT_TOKEN_TO_BE_REPLACED

This feature require that you enable JavaScript in your browser.
END_OF_DOCUMENT_TOKEN_TO_BE_REPLACED

This feature require that you enable JavaScript in your browser.
END_OF_DOCUMENT_TOKEN_TO_BE_REPLACED

This feature require that you enable JavaScript in your browser.
END_OF_DOCUMENT_TOKEN_TO_BE_REPLACED