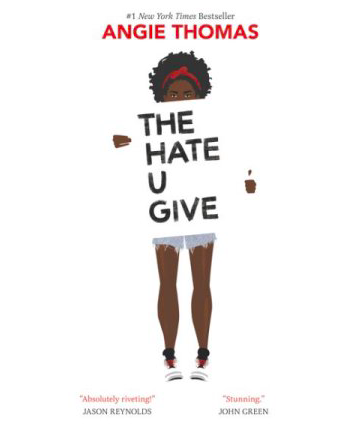 In THE HATE U GIVE, Starr Carter is a teen between two worlds: her school, which is rich, fancy, and white; and her neighborhood, which is poor and black. She navigates this differing terrain every day of her life until her worlds collide when she witnesses the fatal police shooting of her best friend, Khalil, an unarmed black teen. Khalil's death goes viral, and Starr is caught in the middle between the protesters in the street and her friends at school. With the eyes of the world on her, Starr has to decide: Will she say what happened that night? Will it matter?

WHAT PARENTS NEED TO KNOW

Parents need to know that Angie Thomas' New York Times best-selling book The Hate U Give won a 2018 Coretta Scott King Author Honor, a Michael L. Printz Honor, and the Oddysey Award for best audiobook for kids and teens. Inspired by the Black Lives Matter movement, it involves the police shooting of an unarmed black teen. The book covers topics of race, interracial dating, political activism, grief, friendship, wealth disparity, police brutality, addiction, and the media's depiction of African Americans. Parents should be prepared to discuss recent and past instances of police shootings, how they were covered in the media, dealing with grief, and possible reactions to the trauma revealed in the book. There is some swearing, additional violence, sexual situations, and drug use in the book, but it's not gratuitous.

The Hate U Give (Hardcover)

This feature require that you enable JavaScript in your browser.
END_OF_DOCUMENT_TOKEN_TO_BE_REPLACED

This feature require that you enable JavaScript in your browser.
END_OF_DOCUMENT_TOKEN_TO_BE_REPLACED

This feature require that you enable JavaScript in your browser.
END_OF_DOCUMENT_TOKEN_TO_BE_REPLACED

This feature require that you enable JavaScript in your browser.
END_OF_DOCUMENT_TOKEN_TO_BE_REPLACED